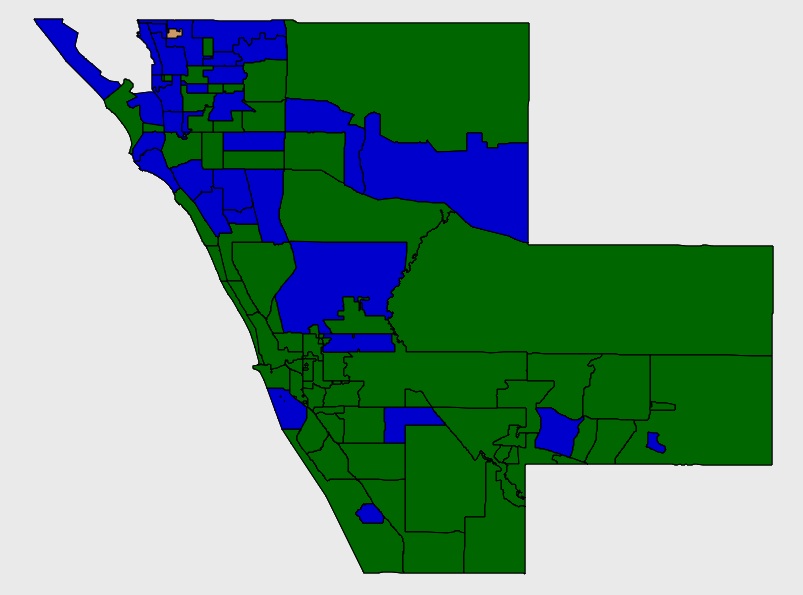 Following the analysis of the Governor’s Race in my earlier post, we move on to the School Board race.

This was covered in the Sarasota Herald Tribune where they wrote about the “North/South Divide” today between voters in Sarasota county.

The Herald Tribune wrote, with regards to the School Board race:

“Even in nonpartisan races, the divide between north and south is clear. In the Sarasota County School Board race, Ken Marsh, a Democrat, won Sarasota County north of Clark Road with almost 50.5 percent of the vote, to 49.5 percent for Bridget Ziegler, a Republican.

South of Clark, though, Ziegler carried 52 percent of the vote to just 48 percent for Marsh.

Particularly problematic for Marsh was Newtown. In one key precinct there, other Democratic candidates won more than 80 percent of that vote.

Though there was indeed a divide, where Marsh won North of Clark by 658 votes, and Ziegler won South of Clark by 3,047 votes, resulting in Ziegler’s 2,389 vote victory, it’s interesting that Ziegler overperformed Republican candidates North of Clark while underperforming South of Clark (comparing Scott v Crist numbers, and taking Wyllie out of the equation).  Also, Marsh underperformed Democratic candidates North of Clark (especially in Newtown, as pointed out above), while overperforming South of Clark.  Perhaps this had to do with the lack of party identification actually being on the ballot.  Perhaps Marsh’s Newtown underperformance also had to do with voters there appreciating Ziegler’s support of vouchers, though there’s no way to know for sure.

One of the most noticeable things about the school board race is the dropoff in votes from the top of the ticket races.  For example, 24,400 less votes (or about 15%) were cast in the School Board race than the Governor’s race.  Though this is not unusual, it is interesting.

Click here to see the spreadsheet attached, analyzing the precincts using numbers from the County Supervisor of Elections taken on 11/7/2014.

A native of Hollywood, Florida, Richard DeNapoli is passionate about law, estate planning, financial planning, real estate and the relationships he has formed through helping others in these areas.

Richard DeNapoli is a native of Hollywood, FL, and a graduate of the University of Miami School of Law (2008, LL.M., Estate Planning), Fordham Law School (2002, J.D.) and New York University (1999, B.A., Politics; B.A. Italian). He was the first person in his family to attend college. He is licensed to practice law in Florida and in the United States District Court for the Southern District of Florida.

In 2007, Richard DeNapoli was appointed as a Commissioner to the Florida Real Estate Commission (“FREC”), and subsequently reappointed when that term was up. Both of his appointments to the FREC were confirmed by the Florida Senate.

He was unanimously elected to serve as the Chairman of the Florida Real Estate Commission from 2010-2011, and he continues to serve on the Commission today. Richard also served as the Treasurer of the Broward Republican Party in 2010, and then as Chairman of the Broward County Republican Party through December of 2012. For more than 15 years, Richard has volunteered in various capacities for Republican candidates in New York and Florida.

Recently, Richard has been focusing on his professional career and on his family. Richard is married to Brigita, and they welcomed a new addition to their family, Victor Alfred DeNapoli, who was born in August 2012.

Thanks for a Great Presidency 5! 173 Attendees!