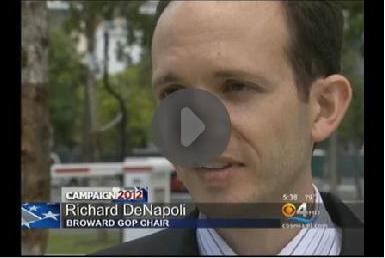 “Obviously it’s absurd, but how do you police it, I don’t know,” wondered voter Augi Moran.

“It’s not right but I don’t know what the government is doing about it,” said voter Seymour Braun.

The chair of Broward’s Republican party, Richard DeNapoli, fears it’s only the tip of the iceberg.

DeNapoli said his office cross referenced social security information with the Broward Elections office list and found hundreds of dead voter names still on the rolls. He said in 2011 there were 9900 deaths in Broward County. Also the Broward GOP checked 2100 of those names and determined 481 deceased voters were on the rolls.

Broward County Supervisor of Elections, Dr. Brenda Snipes is looking into the non-citizen voters and the Broward GOP claims on dead voters. She said verification is a process.

Snipes also noted that reconciling death and voter registration in South Florida is challenging because of our transient population. In other words someone may live in South Florida but will die in another state or even another country.

“We rely on the state to send information and will accept information from families if there is a death certificate,”said Snipes. “We are up to date on the information and process it as soon as we have it,” Snipes insists.

Broward’s GOP is hoping all the rolls are up to date in time for the presidential election in November.

Given the new restraints on voter registration efforts, that has the possibility of hampering some voter turnout in the coming presidential election.

It's a Boy - Vincent Jonas DeNapoli

Thank You for a Successful 2012 Lincoln Day